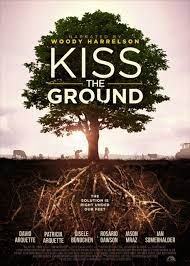 Kiss the Ground was screened for Transition Bondi’s last Summerama film night on Thursday, March 18. In the documentary, narrated by celebrity actor Woody Harrelson, science experts and activists unpack the ways in which the earth’s soil may be the key to combating climate change and preserving the planet. It is a story of a simple solution that is right under our feet.

Harrelson says planet earth is a great place to live but when it comes to the future of our small planet there is so much bad news that it’s overwhelming. The fear that we are headed for a cliff puts most of us into a state of paralysis. “But what if there was another path?” he asks. “A way to heal the planet and keep our species off the extinction list?” Soil, earth, or ground is posited as the savior due to its vast scale and ability to sequester immense quantities of greenhouse gases. “It could just be the one thing that can balance our climate, replenish our freshwater supplies and feed the world. That’s why some people are racing to save our soil, in the hope that our soil just might save us.”

With that inspiring introduction, the film goes on to discuss regenerative agriculture as a solution to our climate issues and aims to awaken people to the possibilities of regeneration. Harrelson says “our mission is simple: we must harness the regenerative power of the earth itself.” Conservation agronomist Ray Archuleta says point-blank: “When we get the soil right we can fix a lot of our issues. Healthy soils lead to a healthy plant. Healthy plant, healthy animal, healthy human, healthy water, healthy climate.”

During the 1930s, after seeing soil destruction, US president Franklin D. Roosevelt created the Soil Conservation Service to save the nation’s soil. He said something which still holds true today: “What I have seen confirms me in the belief that I have had for a long time. That if we are going to win on this problem it relates to working out a plan of cooperation with nature instead of going along with what we’ve been doing in the past trying to buck nature.” To this day the service he created is teaching farmers to reduce tiling and the spraying of industrial chemicals that damage the soil. A good farmer needs to be an environmentalist and live by the adage “if you look after your land, it will look after you”.

Discussions in the film included Drawdown, sustainable animal ranching, desertification, regenerating large tracts of land in China, and offering us ways forward in our individual and community lives. “Our health, and the health of our planet, are connected. If we choose healthy food there is a reciprocation. Not only do we feel better, we are healthier, but the earth gets healthier,” said Brazilian supermodel and activist Giselle Bundchen.

Ecologist for Commonland Foundation John Liu gave a powerful final message: “Human beings emerged in paradise. If we restore all the degraded land on earth we can return to paradise…So let’s restore a little bit of paradise every day. It’s not that difficult. If we stop distracting ourselves with shiny objects and we start to think about what’s really important to us…this is where everyone can find tremendous satisfaction”

So what decisions are you going to make that will make a positive impact on this beautiful planet? There are concrete steps that can be taken to be a part of the regenerative community and movement.  Here are five things you can do today.